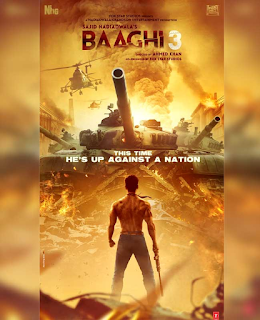 
Baaghi 3 is an upcoming bollywood thriller movie. It is the official remake of the tamil film Vettai(2012).After an overwhelming response from the audience, the Baaghi franchise became a career lifting project for Tiger Shroff. Now, the actor is prepared to thrill viewers with his mind-blowing Marshal arts packed with fighting scenes, romance and his world famous dance.The 2016 release ‘Baaghi’ was a commercial hit and received appreciation from critics as well. The next big action spectacle ‘Baaghi2’ also fetched good number of crowd to the silver screen. So it is expected that this film will surely create a history.


The film was announced on 19 December 2018 by Tiger Shroff  on his Twitter  account by releasing a teaser poster.


After witnessing the actor in  the movie Baaghi 2 fans went crazy looking at the way he executed all the action sequences and this little sneak-peek video would definitely stimulated the interests of the audience.

Tiger Shroff recently disclosed a brief video of him preparing for his upcoming movie ‘Baaghi 3.’ In this video, he is seen working out, improving his ripped, shaped body to perfection. Tiger is taking ‘Baaghi 3’ preparation very seriously! And here comes the video.....

Tiger Shroff and Shraddha Kapoor are all set to impress the audience once again with the third installment of Baaghi franchise.

In this film it is shown that Ronnie and Vikram are brothers who has an evarlasting bond. Since childhood, Ronnie always came to rescue  Vikram whenever he falls in any trouble. Their journey begins when due to some reason vikram had to travel to syria for some work. On this trip, Vikram gets kidnapped by spme people who are not to be messed with but as Ronnie watches his brother getting beaten and kidnapped by ISIS, he decided to go to the extreme level to save his brother's life. Ronnie goes on a rampage of demolition to see his brother Vikram safe again, even if it means that he independently has to take on an whole country. This is how the story of the movie moves on.

MAKING OF THE FILM

As per reports to make the film a historic one the whole unit of Baaghi 3 has given their best.
Now, we get to know that the Shraddha Kapoor is set to start as an air hostess in the film. The actress has attended workshops to understand her role of an air hostess. The director Ahmed Khan and writer Farhad Samji wanted to create a multidimensional role for her. She began shooting in September in Mumbai followed by Agra schedule and then they she flew to Georgia.


Tiger Shroff, on the other hand, had a trip to Israel to train in Krav Maga . The actor  then learned how to use machine guns, pistols, shotguns, among others in Georgia. While Ahmed Khan promised a larger than life action sequences with Tiger Shroff , it seems like that sharaddha also has some action scenes as well.

The shooting of the film took place in Morocco, Egypt, Serbia and Turkey.

Popular posts from this blog

By Kabir February 01, 2020
Bhool Bhulaiyaa 2 Movie StoryBhool Bhuliya 2 is an upcoming bollywood horror-comdey  movie.After the enormous success of Sonu Ke Titu Ki Sweety released in 2018, Kartik Aaryan is on a signing binge. In this year Kaartik became a part of two films  Luka Chuppi which hit the screens earlier this year and upcoming flick Pati Patni Aur Woh. And after this bhool bhuliya 2 is announced. This is expected to be a superhit film as usual delivered by our charming boy Kartik Aryan !

Basically Bhool Bhuliya 2 is a horror movie which is the continuation of the 2007 movie.


Earlier it was announced that Kartik will be stepping into the shoes of Akshay Kumar in the sequel of his  film Bhool Bhulaiyaa. In the poster, Kartik is having similar outfit which Akshay had donned in the official poster of Bhool Bhulaiyaa. This movie will be directed by Anees Bazmee, unlike the first one which was directed by Priyadarshan.
Bhool Bhulaiyaa 2 Movie First Look