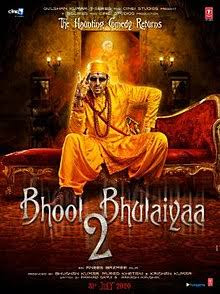 Bhool Bhuliya 2 is an upcoming bollywood horror-comdey  movie.After the enormous success of Sonu Ke Titu Ki Sweety released in 2018, Kartik Aaryan is on a signing binge. In this year Kaartik became a part of two films  Luka Chuppi which hit the screens earlier this year and upcoming flick Pati Patni Aur Woh. And after this bhool bhuliya 2 is announced. This is expected to be a superhit film as usual delivered by our charming boy Kartik Aryan !

Basically Bhool Bhuliya 2 is a horror movie which is the continuation of the 2007 movie.


Earlier it was announced that Kartik will be stepping into the shoes of Akshay Kumar in the sequel of his  film Bhool Bhulaiyaa. In the poster, Kartik is having similar outfit which Akshay had donned in the official poster of Bhool Bhulaiyaa. This movie will be directed by Anees Bazmee, unlike the first one which was directed by Priyadarshan.

Popular posts from this blog

Baaghi 3 is an upcoming bollywood thriller movie. It is the official remake of the tamil film Vettai(2012).After an overwhelming response from the audience, the Baaghi franchise became a career lifting project for Tiger Shroff. Now, the actor is prepared to thrill viewers with his mind-blowing Marshal arts packed with fighting scenes, romance and his world famous dance.The 2016 release ‘Baaghi’ was a commercial hit and received appreciation from critics as well. The next big action spectacle ‘Baaghi2’ also fetched good number of crowd to the silver screen. So it is expected that this film will surely create a history.

The film was announced on 19 December 2018 by Tiger Shroff on his Twitter  account by releasing a teaser poster.


And round 3 is on! #SajidNadiadwala's #Baaghi3 will be out on 6th March 2020. This one’s for you Baaghians. 😊🙏 @khan_ahmedasas@foxstarhindi@NGEMovies@WardaNadiadwalapic.twitter.com/yivYiONFij — Tiger Shroff (@iTIGERSHROFF)…
Post a Comment
Read more